I hope you have been able to learn from my success at living frugally. I think it also important for me to share my mistakes. After all, the greatest lessons are learned from failures.

I have found that mistakes do not go away no matter how long I ignore them!

Back in the day, sometime last century, I decided to use kitchen wall paper as shelf liners. I assumed that I could just roll it up and replace it when it became dirty.

The humidity of the kitchen activated the glue on the back, and when I went to replace it, I found it stuck to the shelf.  I ignored it for over a decade.

This week I spent an hour scraping it off of three shelves. Removing the paper in all of the shelves is my spring project.

This was one time when using what I had on hand was not a good idea! 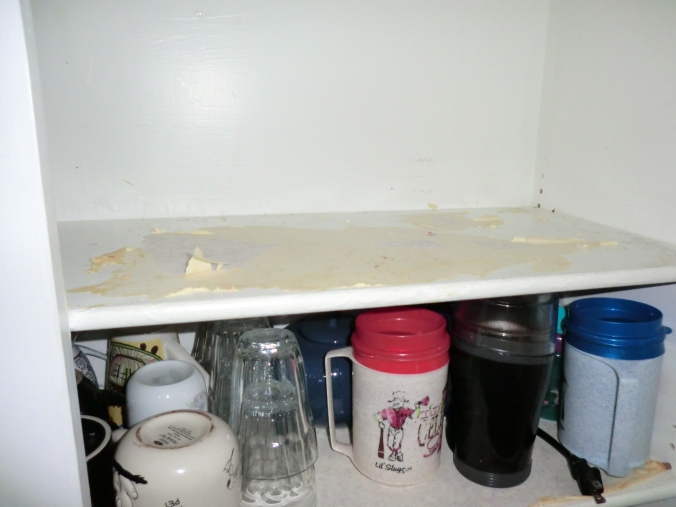 Wallpaper does not make a good shelf liner!

One thought on “HOUSTON WE HAVE A PROBLEM”

Sitting in the Garden of the Tomb, Pastor Monte Knudsen commented to David and I, "Easter will have a whole new meaning this year."
I will answer my own question: "No, I do not burn my decorative candles!" :)
My "burning" question: Do you burn your decorative candles or not? I hate to light them once and then toss them.
I chose my entryway for the @theinspiredroom challenge of #alovelyjanuary. I painted the red accent wall dove feather gray. We replaced the wood doors with white doors and added black trim.
My sister Cheryl gave me this bird for Cristmas. I found the best place to display it - on a wreath!
2021 Christmas Carol Theme