Taking a train trip has been on my “Bucket List” for a long time. I thought we would ride to California to visit relatives, but Mr. Frugalfish came up with a better plan!

We were in Boone IA at the deployment ceremony of our nephew when he saw information about the “Boone Scenic Valley Railroad,” see bsvrr.com.

He purchased tickets for my birthday/vacation. We rode the “City of San Francisco” car that was built in 1950, modified in 1985, and donated to the Iowa Railroad Historical Society.

When we arrived at the station we saw a hummer limo and the occupants really thought they were hot stuff…until it was time to board and we were one of the first ones because he paid extra for a private compartment.

There was a table set for two and the compartment looked the same as it did in 1950. I could just imagine Cary Grant riding in the car. 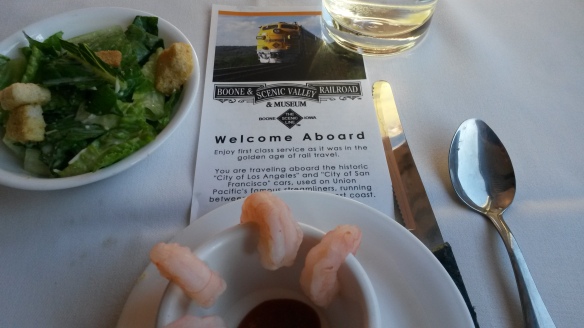 We were just finishing this course when we crossed the “Bass Point Creek High Bridge.” It is 156 feet tall and 784 feet long. I tried to concentrate on snapping pictures because I am not a fan of heights. It didn’t help that the train seemed to slow down to 5 mph as we crawled over the bridge. They had a great lookout on the caboose, but I stuck to my compartment!

Our main course was served as we passed through “Don Williams Park.”

It was in “Don Williams Park” that we passed over the only privately owned area on the Des Moines River. It was called “Tillie’s Pond,” and of course the train slowed way down as we crossed that bridge.

After the sun set, they brought our dessert…Cheesecake!” 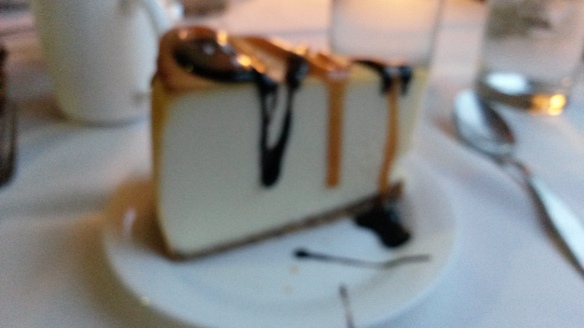 The train was up to speed by then and that made picture taking more difficult. On the ride back they slowed down over the “Bass Point Creek High Bridge.” In the dark, the lights under the train reflected on the top of the trees, and along with the rocking from side to side, it was enough to make me cling to my husband’s arm!