We had a substitute drummer for a few months this summer and I would really like to get to know his parents.

Because he is driving the vehicle that his parents drove him home from the hospital in when he was born.

Many people change vehicles every few years, or when they pay off the vehicles they are using right now. I heard one couple say, “You are always going to have a car payment, why not let it be on a new vehicle.”

I have two problems with that statement:

Keeping vehicles for years is a family trait on my father’s side. My uncle purchased a large car in which his children learned to drive. Later, I learned to drive in the same car out in a dusty field on their farm.

Fast forward a few decades and my then 12-year-old son wanted to help cousin Danny on his farm. Guess what car he learned to drive in…yep, the same green monster in which I learned!

Another farmer told me the secret to longevity in vehicles is in the fluids. He said to keep the oil, brake fluid, transmission fluid, etc. topped out. He also advocated timely oil changes. He drove a van until it was close to 200,000 miles. A friend acquired it from them drove it a few years more.

We own a 1995 truck. Our mechanic son replaced most of the guts of it: engine, transmission, alternator, etc. We put several new parts on it and had it painted, see here.

Below is a picture of Eric our substitute drummer. I got that smile out of him when I asked about his girlfriend. (Sorry ladies, he’s taken.)

He apologized for not washing it before we took the photo. Then he said, “There’s a little rust on it, but who cares, it’s paid for.” 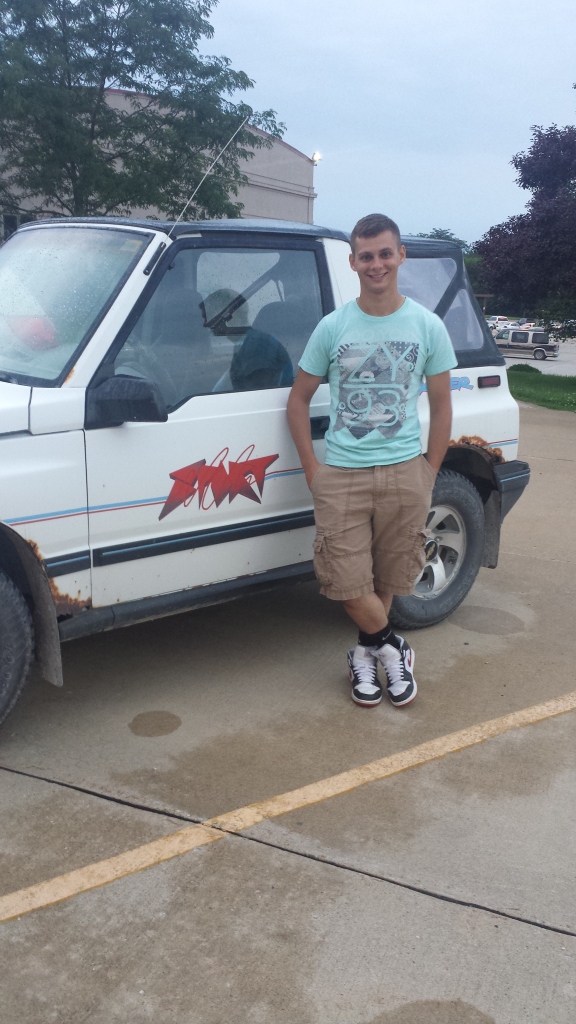 Drummer Eric standing by the car he drives, in which his parents brought him home from the hospital when he was born.

(Note: Whenever you see a word in blue, it is hyperlinked to another article, resource, or more information. Click on it and it will take you to there.)

How do you save money? Cancel reply