I remember shopping for the perfect prom dress with my daughter in 2006. She chose a gorgeous confection in purple – her favorite color.

She did not get to buy it because I had given her a limit of what I would contribute. She saw the dress in a magazine and decided she could earn the money by working three part-time jobs. But the actual price would have purchased a good, used car, and all of her work did not raise enough funds.

We went to the store and she purchased her second choice. It was a lovely black and white strapless dress with embroidery all along the gores of the dress. It was beautiful.

Shopping for prom back then was all about staying in budget. Fast forward to 2011…yikes…no income for me!!!

Luckily, I was not buying a dress but looking for a suit. I always thought I was the most frugal in this household, but that year at prom I was proven wrong.

My son didn’t want to rent a tuxedo, or buy a suit; he wanted me to cut down his father’s pinstripe suit! In fact, he insisted on it!

Halfway through the alterations, I tried to talk him out of it, but he had his heart set. So, I folded over the sides of the vest and sewed them down. I took some tucks in the pants in the front and the back.

That three-piece suit has a history. I bought it for Christmas in our first year of marriage at a good men’s clothing store. David had a couple elderly relatives pass away and he served as a pallbearer. He had a blue suit and I thought he needed a black one. He started working overtime and I used that money to make payments on this black, pinstripe suit.

He wore it to funerals and weddings and when he wore it on Easter Sunday, people thought he was going to preach! This is a picture of him wearing it as he was the emcee at a Valentine’s Banquet in 1997. 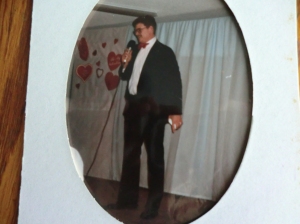 My husband wearing the suit to emcee a Valentine’s Day Banquet in 1997.

It is now enjoying a second life in Derek’s closet. It has been to its share of weddings with him, and a couple of times, parts of it have gone along to play with the band he was in.

The moral of my story is:

This is me and Derek before he left for prom. 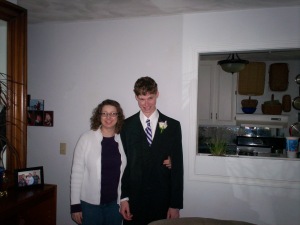