One of the best parts of our weekend away was breakfast at the motel. They used real plates, cups, glasses, silverware, and offered: egg rounds, bacon rounds, biscuits, gravy, and “make your own waffles.” They had chocolate chip batter and I was in heaven. I covered that waffle with strawberries, blueberries, sliced almonds, cinnamon, and whipped cream!

David said he saw a lady take a piece of buttered bread and put it in the waffle iron instead of making a waffle. It was a Belgian Waffle maker and they were thick! That gave me an idea!

While we were gone, our youngest was on his own for meals. You guessed it…he made hot dogs. (Yuck.) And every time you have hot dogs, you end up with two extra buns. (Why do they do that?)

I made angel hair pasta with homemade spaghetti sauce for dinner Friday. I took those two hot dog buns, cut them in half, and buttered them. I sprinkled them with garlic, oregano, and a dash of rosemary and stuck them in my waffle iron until the light went off.

It worked! I don’t like to use the oven in the summer and the waffle iron is smaller than my electric grill. I made the spaghetti sauce in a Crock Pot and let it simmer all day. A salad, watermelon sticks, and chocolate pudding completed the meal. I put mini marshmallows and trail mix on top of the pudding for fun!

I wonder what else I can make with that waffle maker? 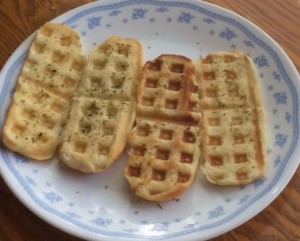